Sweden’s credentials in sustainability and Stockholm’s vibrant fintech ecosystem are converging into a flourishing green fintech market where players are gaining traction and starting to expand globally.

This booming sector is highlighted in the 2021 edition of the yearly Stockholm Fintech Guide, which depicts the state of fintech in Sweden’s capital city, outlining the key trends observed over the past year and the “next wave of fintech” innovation that’s emerging.

Green fintech was highlighted as one of these growing sectors, a market that has emerged on the back of Sweden’s position as an environmental pioneer, and Stockholm’s rise into a hotspot for fintech startups. Stockholm now features an impressive track record that counts the likes of buy now, pay later (BNPL) giant Klarna, the second most valuable fintech company in the world, and Tink, an open banking startup which Visa agreed in June to acquire for a staggering EUR 1.8 billion.

The paper outlines several of the city’s hottest green fintech startups and provides an overview of their latest achievements.

Swedish startup Doconomy provides a portfolio of services that cater to the rising need of making climate impact understood and actionable. These include impact data services for individuals and corporations, and a product called the Åland Index, which allows customers to assess the impact of a service solution, including climate calculated financial data which presents both CO2e and H2O impact per transaction.

Doconomy’s technology currently processes close to 90 million transaction impact calculations per month in 20 markets for clients including Nordea, Klarna, BNP Paribas and Standard Chartered. The startup raised US$17 million in funding in September in what it claims to be the largest ever climate fintech investment in Europe. Another green fintech startup highlighted in the paper is Finana, which operates under Datia. Founded in 2019, the company works with fund managers and their portfolio companies to automate sustainability reporting and data collection.

Datia currently offers three main products: the Taxonomy Report, a cloud solution that helps companies and investors understand, analyze and report in line with the European Union (EU)’s Taxonomy framework; the SFDR (Sustainable Finance Disclosure Regulation) Report, which allows investors to automatically calculate key environmental and impact metrics such as carbon footprint and energy intensity across their portfolios; and Active Ownership, a platform for owners to keep all voting, nomination committees, meeting material, and impact discussions in one place.

Today, more than 20 funds use Datia, which together manage over EUR 70 billion in assets. These include Söderberg & Partners, one of Sweden’s largest insurance brokers and advisors, Atle, the investment management arm of Swedish listed investment company Bure Equity, as well as fund managers Spiltan Fonder and Didner & Gerge. 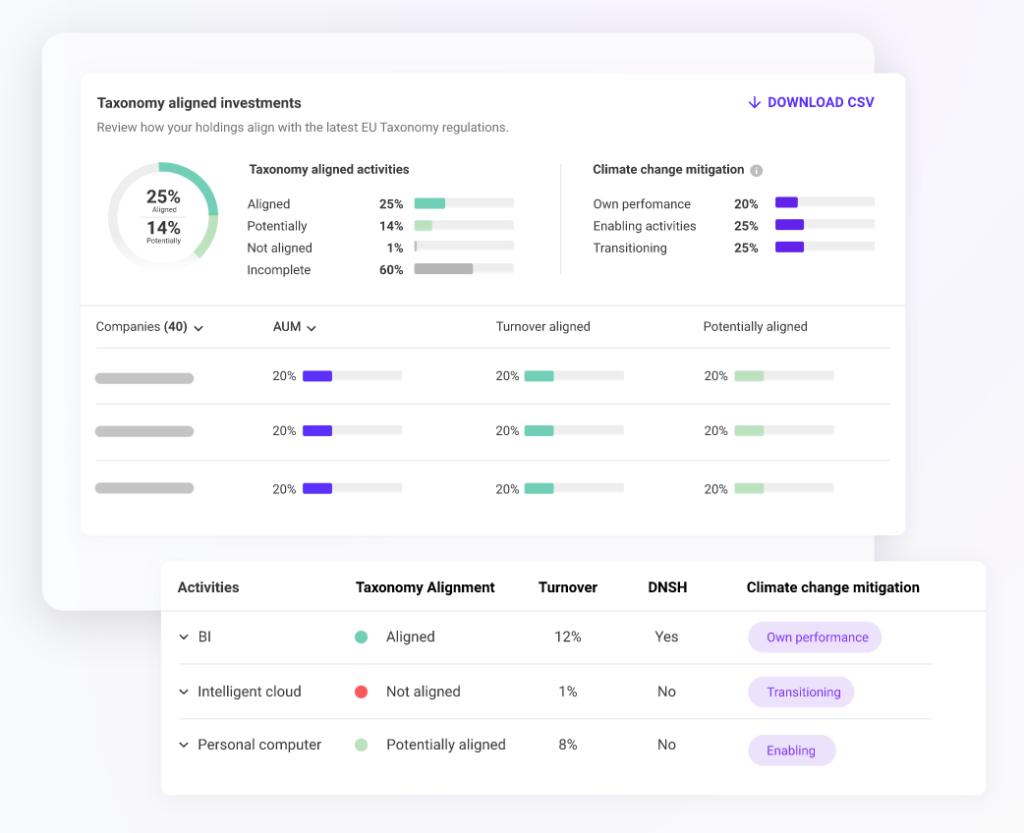 Meta Mind, which was founded in 2014 in Stockholm, is a leading player in the area of corporates’ sustainability reporting and is said to have created the world’s first carbon accounting engine.

Its software-as-a-service (SaaS) product, Normative, provides companies with accurate and actionable intelligence about their carbon emissions and guides them towards reaching net zero emissions.

The company has hundreds of clients and is the technology provider for the SME Climate Hub, an initiative by the International Chamber of Commerce, the Exponential Roadmap Initiative, the We Mean Business coalition and the United Nations’ Race to Zero campaign which seeks to help small and medium-sized enterprises (SMEs) reduce emissions and build business resilience.

It raised EUR 10 million from some of Europe’s largest climate tech funds earlier this month.

Other green fintech startups from Stockholm highlighted in the paper include Earthbanc, which uses satellite data and artificial intelligence (AI) for carbon offsets auditing and reporting, and Green Assets Wallet (GAW), a blockchain startup aimed at making investments into green bonds more transparent.

Stockholm is emerging as one of Europe’s biggest and most dynamic fintech ecosystems. Findexable’s 2021 Global Fintech Rankings place Stockholm’s fintech scene as the 4th biggest in Europe, after London, Berlin and Amsterdam.

The city dominates not only the Swedish fintech landscape but also the broader Nordic region, with Stockholm-based companies accounting for nearly 90% of all fintech investment deals in Sweden and 85% in the Nordics respectively, according to the 2021 Stockholm Fintech Guide.

Besides green fintech, other segments expected to grow in the near future include regtech and insurtech. Stockholm’s regtech sector is currently represented by 40 companies and could very well be one of the largest regtech ecosystems in the Nordics, the paper says. Sweden’s insurtech sector, although fairly nascent, is on a steady development path. With more than 30 insurtech companies, Stockholm boasts the largest insurtech scene in the region. 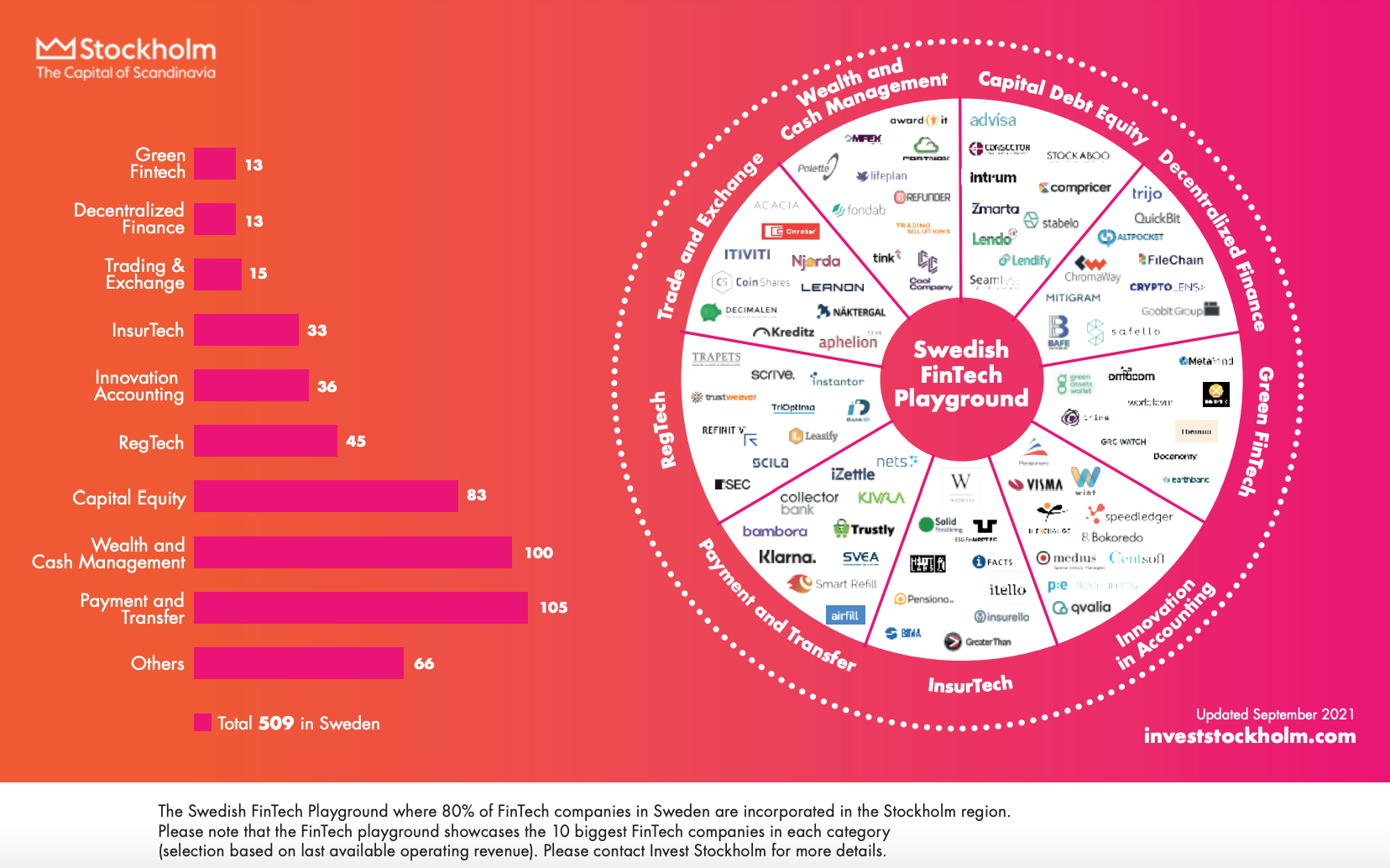 This article first appeared on fintechbaltic.com